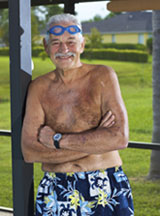 On April 26, 2008 Ike was viciously attacked by an 11-foot, 400 pound alligator on the 13th hole of the Tampa Palms golf course. On that fateful evening, Ike jumped into the pond not realizing an alligator was hiding down below the surface of the murky water. Part way through his dive, Ike felt a mind-numbing pain strike his left shoulder. As he turned his head to see what had hit him, he noticed a set of white alligator teeth clamped down on his shoulder piercing through his wetsuit all the way down through the joint.

Since maintaining clarity during the attack was necessary to stay alive, Ike tried to wrestle out of the gator’s grip. As the two rolled under the water, Ike found his bearings and was able to take his right thumb, jab it deep into the alligator’s eye and twist it as he attempted to set himself free. After a few more struggles, Ike was able to break away and call for help.

En route to the emergency room, the EMT’s attempted to remove Ike’s wetsuit, but Ike asked that they wait until he was at the hospital because he feared the amount of blood and tissue damage behind his wetsuit. In the emergency room physicians discovered that the alligator had shredded Ike’s entire rotator cuff to pieces, completely dislocating his shoulder. The on call orthopedic surgeon knew that he was not well-equipped to repair the damage then but was able to stitch together Ike’s shoulder enough to allow it to rest in a brace. The surgeon urged Ike to see an orthopaedic surgeon immediately.

Ike was recommended to Dr. Louis Starace through an old friend. When the two first met, Dr. Starace was unaware of the severe damage to Ike’s shoulder. Upon examining him, Dr. Starace knew that there was only one application strong enough to augment Ike’s shoulder. He chose to use GRAFTJACKET™ Regenerative Tissue Matrix to augment the repair of Ike’s shoulder because it of the high suture retention strength, which was crucial for allowing Ike to regain any function in his shoulder.

Ike feared his recovery would be unbearable as his family and friends warned him about the discomfort rotator cuff surgery causes. However, Ike felt no pain or discomfort during his entire recovery. In fact, he only took aspirin to relieve any tightening or swelling he felt.

A mere seven months after his attack, Ike’s shoulder has completely healed and his arm is fully functioning. “I couldn’t be happier with the results,” Ike says. “I had a great surgeon who did the right the thing.” Although Ike is now fully recovered from the gator attack, he has no intention of diving back into the water again and has returned to working on dry land.

Wright Medical’s GRAFTJACKET™ Regenerative Tissue Matrix is intended to reinforce the rotator cuff tendon. GRAFTJACKET™ Matrix is made from donated human skin, which undergoes a process that removes the epidermis and dermal cells. This process allows the body to accept the matrix and reduces the rejection response. The processing steps sufficiently preserve the human dermal tissue, including its native protein, collagen structure, blood vessel channels and essential biochemical composition, to allow cellular repopulation and revascularization through the body’s natural healing process. This means that the body can use GRAFTJACKET™ Matrix as it repairs itself.

These results are specific to this individual only. Individual results and activity levels after surgery vary and depend on many factors including age, weight and prior activity level.
There are risks and recovery times associated with surgery and there are certain individuals who should not undergo surgery.
Only a physician can tell you if this product and associated procedure are right for you and your unique circumstances. Please consult with a physician for complete information regarding benefits, risks and possible outcomes. 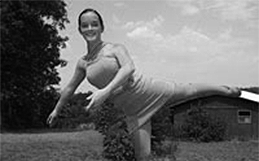